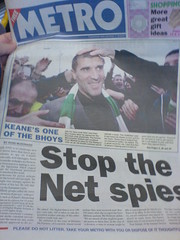 The Data Retention vote in the European Parliament is today the front page story in Dublin’s Metro Newspaper.

It leads with a spokesman for the minister for justice saying that he intends to fight this law hard, and then carries on with paragraphs of helpful quotes from Digital Rights Ireland Chairman, TJ McIntyre.

But as you can see in this reading of events at A crooked timber , the Minister’s opposition is less principled than it seems. Or, perhaps it would be fairer to say, it isn’t the principle of Data Retention he’s opposed to, but the use of Qualified Majority Voting, instead of unanimity in the Council of Ministers to decide a Justice issue.

Ireland, as a small country, values its veto powers. That this may be the driver behind his announced challenge to the law is also hinted at by the support of Slovakia, another small country, for his position.