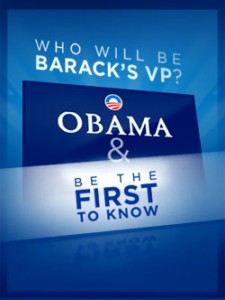 Anyone interested in the ongoing media revolution would do well, as I’ve suggested before, to keep a close eye on the US Presidential election campaign. The US press are currently in a state of high agitation over who Barack Obama’s running mate is likely to be. The announcement, expected in the next hour or two, will be made via text message, to hundreds of thousands of supporters who have subscribed to the campaign’s text update service. With their middle man role cut out, where does that leave traditional media? “Begging viewers to stay tuned so CNN can bring them coverage of a text message”, that’s where.