Home / General / Never Been In A Riot

Never Been In A Riot 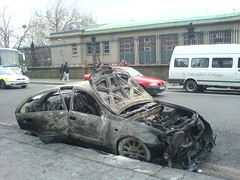 In a previous life, I worked in the Department of Social Welfare, several stories above Busaras. My desk was beside a window, overlooking the Liffey. This should have put me in a good position to observe the Bus Eireann coach that went out of control, crashed through the walls of the bridge and went over into the river, leading to a long rescue operation while passengers were taken out of the bus, now nose-first in the river. My flatmates were keen to hear all the details of a story they could only follow on the radio. Unfortunately, I hadn’t turned to look out of my window all day, and had therefore missed the whole thing. People sometimes call me unobservant.

All of this is by way of saying that I can empathise with Kevin Breathnach who wandered out of a bookshop and into a full scale riot this afternoon. It’s the sort of thing that would happen to me.

Though I only have news reports to go on, I must say that his reference to “one thousand plus fairly drunken scumbags in Celtic shirts” seems to me to have the ring of truth to it. Sinn Féin claim to have nothing to do with what went on today, and on this rare occasion, I believe them. But I was very unsatisfied with this evening’s report on RTE news, which went into great detail about the day’s events without once telling me what I wanted to know – who organised the protests? A quick glance at the web told me that it was Republican Sinn Féin, aided and abetted by various non-alligned scumbags, so why the coyness on RTE’s part?

On a weekend when Dublin played host to Welsh rugby fans, some of the nicest people you could meet at a sporting event, and when Digital Rights Ireland had it’s own British visitor, today’s events were shabby and unpleasant. Much time will be wasted on discussing what they “mean”, but I can think of little in the way of reaction than to mutter “dickheads”, shake my head, and try to forget this scummy day.

[Ed: See the car above being looted and then smashed on video here, a photo of it burning here, from the Flickr loveulster tag. The owner was a very upset middle aged woman who had returned from a day’s shopping. The van in the background belongs to St. Columba’s College and was donated by the Parents Association to ferry the kids around. Its windows were smashed also.

If you watch the video, you’ll notice a beefy man in a red jacket who tells the boy smashing the side window to do the back window as well. When he does, our beefy man takes a bag from the window for himself.]