Doctors Push Back in Neary affair 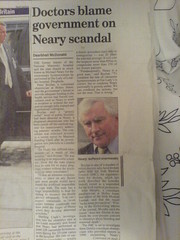 While the rest of Blogland have been discussing page 3 of this week’s Sunday Times, I was more interested in the story that ran on the Front page, and carried on to page 2 under the heading “Neary was let down by state“.

Here, amongst other interesting remarks, Peter Boylan, consultant obstetrician at Holles Street hospital is quoted as saying “Fundamentally, Neary is a good man. To condemn the rate of hysterectomies at Our Lady’s is correct but to condemn Neary personally is grossly unfair. We can condemn the actions, but not the man. That is wrong.”

I find it hard to seperate the actions of a person from themselves. The criminal and civil courts do likewise.

John Murphy, consultant paediatrician at Holles Street hospital and editor of the Irish Medical Journal has written an editorial in the upcoming edition of that publication regarding the Lourdes Report. He is quoted as saying the report “lacks some perspective”.

The Irish Medical Council has announced that their Fitness to Practice committee will be investigating the three doctors who examined Neary’s practice. These were Prof Walter Prendiville, consultant obstetrician and gynaecologist at the Coombe Women’s Hospital in Dublin; Dr John Murphy, consultant obstetrician and gynaecologist at the National Maternity Hospital, Holles Street; and Dr Bernard Stuart of the Coombe Women’s Hospital.

Two of them said
“We find no evidence of questionable clinical judgment, poor operative ability or faulty decision-making [by Dr Neary].”

The third said:
“It is my firm conclusion that Dr Neary should continue to work in Our Lady of Lourdes Hospital pending any formal investigation.???

John Murphy, consultant paediatrician at Holles Street hospital and editor of the Irish Medical Journal, believes that these men ought not to be investigated.
“The inquiry into the obstetricians will also deter doctors from peer reviews if it means they will be struck off for their efforts”

Certainly, if there is to be sanction for a failure to honestly assess a colleague’s work, it will bring home to doctors that there is the possibility of being held to account for what they say and do. A refusal to work under those conditions would be a stark admission of consultants’ opinions of their own actions.