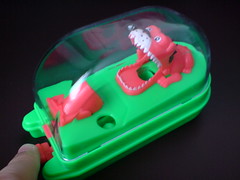 A few weeks ago, I decided to encourage Fustar in his life-affirming journey through China’s finest playthings, Manky Toy Monday. I bought a few likely lads myself intending to remind him of the joys of a Manky Toy.

But before I could write my own gizmo guides, he sprang back into life with two new manky toy spectaculars- now with video!

My own contribution remains second best, but I offer to you today the mighty wonders of the euphoniously named “My First Super Shot Ball Game”. Sharing one of the more surprising traits of other Manky Toys, we are urged to Collect Them All!.

Photos of the alternative games in the series reveal what appear to be three Super Shot Ball Games, differing only in their plastic hues. But what is a Super Shot Ball Game? A game so addictive, and universally popular, that it can be asserted with certainty that this will be merely the first in a long lifetime of Super Shot Balling, obviously.

Or, in the alternative, a small one player version of Hungry Hippos.

Only a proper description of the game will help you decide which is your truth. A plastic dog sits crouched inside a clear dome. A cannon points directly at his head. You shoot balls out of this cannon by means of a springed mechanism attached to the outside of the dome. He can’t move to avoid the cannon balls. The dome doesn’t leave him any room for escape. The only way he can stop the balls from hitting him in the face at full speed is to catch them in his mouth and swallow them. This is recognised by stage magicians as one of the most dangerous tricks in their profession. Most would hesitate at a single bullet catch. By necessity, our canine captive must catch as many cannon balls in his mouth as you fire at him.

And, as the flicking motion of a properly used cannon mechanism can build up into a regular volley of balls shooting at the dog’s head, the swallowing motion has to become almost reflexive. The method by which the balls are recycled from the dog to the cannon is the final indignity. It is this last factor that makes clear that what we are playing with is a representation of one of the nastier punishments in Hades.

The odd thing about playing Super Shot Ball is that you start off thinking how rubbish it is. Then you get the rhythm going and you manage to get your first ball into the dogs mouth. Immediately a compulsion to continue shooting balls into his mouth grips you- a compulsion beyond the rational, in my experience. If you break the flicking rhythm in any way and end up shooting him in the face, the sense of frustration drives you straight back to the task.

One question remains. If the packaging on this Super Shot Ball declares itself in print to be “My First”, and I buy a second one, how will it know?