Home / General / Newspapers and the Price of Respect

Newspapers and the Price of Respect 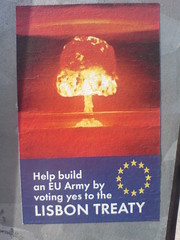 Co. Meath, 1 day after the Lisbon
Treaty passes, we presume

As Cian on Irishelection pointed out, the Irish Independent yesterday printed a story on the odder anti-Lisbon material available. This story hung on the inclusion of two images from the Flickr pool I had set up earlier in the week. Both images were licenced under a Creative Commons licence, allowing their use for non-commercial purposes as long as the owners were given attribution.

Unattributed use by the Indo breached that licence, of course. The paper has now offered a modest 3 figure sum to Daragh O’Toole, who contacted the paper looking for payment for his image.

Today, the Irish Times, similarly attracted by the striking visuals the story offered ran with the image of Dustin submitted by the publicity-shy Jazz Biscuit and my Mushroom cloud image.

My Mushroom cloud image is more generously licenced than the pictures used by the Independent yesterday- I allow for even commercial reproduction if I’m credited as the photographer. No such credit is given and the story accompanying the pictures makes no mention of the IrishElection.com site, where these pictures was first publicised.

This is a story of newspapers’ lack of respect for the contribution to the national discussion made by Irish bloggers, Flickr photographers etc.

These images were swiped because nobody cared enough about the rights and preferences of their owners to seek permission to use them for a reasonable fee. In the case of my picture, above, they need only have given me a credit. Now I’ll be invoicing the Irish Times for the unauthorised use of my image at a punative rate.

Swiping things from the internet without acknowledging their source may look like a cheap way to fill column inches but as more of their readers become the originators of the lifted material, it carries a very high price.