Shell, Broadhaven Bay and the Failure of News 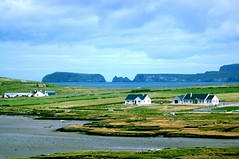 During August of this year I wrote a blizzard of letters for clients of McGarr Solicitors who were worried about their crab fishing pots. As it turned out, they had good reason to be worried.

The story was not well covered in the national newspapers and had a number of dimensions which were simply missed in the reports which did make it to print. The television news is hopeless for complicated stories such as this. But two news sources did stand out for informing their public. Firstly, the Mayo News made the effort to give its readers a proper overview of events. That linked report, and its accompanying photograph, will tell you more about the real meaning of events than any other paper’s entire output on the topic.

The medium to come up trumps, as so often, was good old fashioned wireless. Both the local radio station Midwest Radio and Pat Kenny’s programme on RTE Radio 1 went further than just reporting events as a clash between equal and opposite forces. They let people to tell their own stories- rather than just reading press releases from the parties who could afford to pay people to write press releases for them.