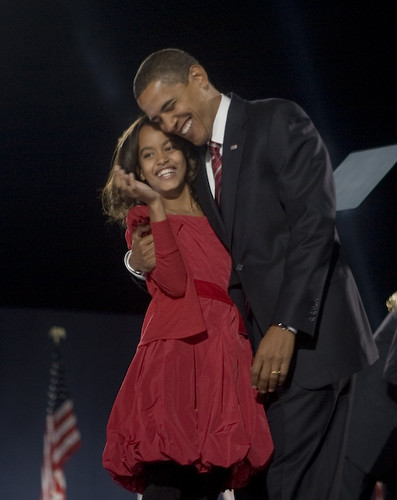 A week later, and it still seems hard to believe. I surprise myself by being stirred, thrilled even, by even the most schmaltzy and saccharine of the celebrations of the election of Barack Obama. I looked at the papers on Thursday with something approaching wonder. Each one of them had adorned its front page with one of a selection of photos from his speech in Chicago. In an instant, this is the new face of America. Burned into our memories, a young family in black and red, more photogenic than any family has a right to be, in front of flags that suddenly mean something different now, something better than what they meant a few days before.

Like all politicians, he will disappoint. There will be screw-ups and compromises, and I will bitch about him as much as anyone else. But even that is a change for the better. How many times did the current US President disappoint you? Though I was sickened, appalled and infuriated by him, I cannot say I ever felt let down by George W. Bush. An environment where we have low expectations of politicians is one where democracy itself is weakened.

Word is filtering out of what President-Elect Obama plans to do in his early days in office. Many of the most egregious Bush policies, signed into law by executive order, will simply be signed out of existence. Guantanamo Bay prison, an ongoing stain on the honour of the United States and on all those nations (ours included) who connive in its existence, will be shut down. Limitations of stem cell research will be loosened. Drilling for oil in wildlife sanctuaries will once again be restricted. If Obama did nothing else for four years, those actions alone would make him a better president than George W. Bush.

The cultural impact of an Obama presidency will be huge. You can feel it already. The past eight years have been the Age of Bush. The proudly shallow vulgarity and ignorance that have characterised the era were legitimized from the very top – Bush was the first tenant of the White House one could easily imagine revealing the contents of the Presidential fridge to the MTV Cribs crew. Paris Hilton was the perfect celebrity for the Bush years. And as with Bush, success alone was enough to lead some people who ought to have known better, to pretend there was more to her than a particularly unpleasant rich kid. It was fashionable for a time amongst the more unusually dim pundits to say “Bush isn’t stupid you know. He’s quite shrewd”, just as there were those who’d tell you that “Paris is an astute business woman”. Thus do those who worship success delude themselves. Paris Hilton is everything she appears to be, and nothing more. George Bush really is that stupid. You can see it in that angry, confused look on his brow. He’s angry because he doesn’t understand, and somebody is going to suffer because of that anger. Watch a few episodes of Malcolm in the Middle, paying special attention to Reese, and you will know all you need to about the nature of George W. Bush’s character. 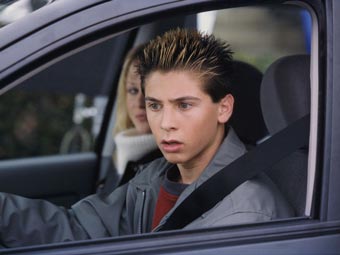 The world that Bush made is already beginning to melt away, in part because the credit that financed it has dried up. It seems obvious that the whole thing was an unhealthy splurge, now that the bubble has been popped. While it continued though, it was almost impossible to see past it or to imagine it could change. Since Wednesday morning, I feel that perhaps the world isn’t going to hell quite as quickly as I had hitherto believed. That’s not much, but it’s a good deal more positive than I’ve felt since 2000.

Already, as others have already noted, the political and media class here in Ireland are busy learning all the wrong lessons from the Obama victory. When Mary Robinson became President of Ireland in 1990, it was on a completely unexpected wave of popular enthusiasm. The message, surely, was that a dam had broken, and that the country had finally caught up with the liberal trailblazers of the 70’s and 80’s. The main political parties surveyed the scene and took a very different message from the result. In the next election, all of them nominated female candidates. This is what passes for deep political thought in Ireland.

So it was no surprise to see newspaper columns and blog posts bewailing the absence of an Irish Obama. Perhaps the most cringe-making of these articles was the one in last Sunday’s Tribune headlined “Enda: Yes, He Can” (Even now, I squirm with embarrassment at the thought). The lesson taken home by political professionals is not that we need a revitalised politics characterised by participation and a sense of civic duty. What they have chosen instead to learn is that we need a charismatic leader and a new website. Never mind the fact that we had a government for ten years based around the cult of Bertie Ahern’s personality, and look where that left us.

Waiting around for an Obama is a terrible idea both in principle and in practice. In principle, because it’s undemocratic and lazy and contributes to a degraded civic life, where nobody is willing to take responsibility for the condition of their own country. In practice, because Barack Obama became the man he is through his involvement in politics. He was not beamed down into the US Senate a fully formed leader, but became one through years of hard, dull and often unrewarding political effort.

If we all steer clear of politics because politicians are fools, then where do the Obamas come from? Politics is always filled with fools. When everyone else gets disillusioned and drifts away from public life, the fools are the ones who will always, always stay in the game. And the more intelligent people leave politics, the greater power the fools end up having. Politics is boring and often incredibly depressing. Change takes years, even decades of effort, for which nobody will thank you. Often, you will not succeed. But something is going rotten and stagnant in Irish life, and if decent intelligent people sit around waiting for Obama, have no doubt that there’s another generation of fools all ready to take the wheel.