One of the oldest and most pernicious myths about the Jewish people is that known as the Blood Libel. This is the belief, dated by some scholars back to the the 5th Century, that Jews were in the habit of kidnapping Christian children. The most common version alleged that the children were killed and their blood was used to thicken matzo balls for the passover meal. The myth has been remarkably resilient, and despite it’s patent and grotesque absurdity, is still believed in certain part of the world even now. Where a people are despised, but not really known, this kind of myth can be very difficult to dispel, being handed down from generation to generation and undisturbed by any actual contact with the people concerned. The Jew was long a bogeyman, used by parents to scare children. Sacha Baron-Cohen’s film Borat mined dark laughter from this ignorant superstition. At one point in the film he is terrified by cockroaches in his room, convinced that they are Jews who have taken the form of insects. He is able to believe this precisely because he knows nothing about actual Jews.

Folklore is not always pretty and picturesque. It can also embody the darkest fears and hatreds of people and nations. The Blood Libel is folklore, and it runs like a red thread through Western history. In 1255 in Lincoln, when a 9-year old boy disappeared and was later found dead in a well, people were all too ready to believe that it was the doing of a local Jewish man, or, more generally, of “The Jews”. There was no evidence of course, but 90 Jews were arrested for the crime, 18 of whom were executed for refusing to confess (the remainder were pardoned in exchange for confession). The incident spawned a ballad which was to enter the tradition of folk music, first in Britain, and later in America. The most famous ballad version of the tale is known as “Sir Hugh, or the Jew’s Daughter“, where a beautiful Jewish woman lures the boy to his grisly death:

“She’s led him in through ae dark door,
And sae has she thro’ nine;
She’s laid him on a dressing-table,
And stickit him like a swine.

The song is also quoted in Ulysses, in the penultimate Ithaca chapter, when Dedalus, showing his more or less bottomless ability to say the wrong thing, quotes it in full to the Jewish Bloom, who has just rescued him.

In some versions, perhaps originating in areas where there were no Jews around to hate, the Jew’s daughter is replaced with a Romany woman. The rest of the tale is unchanged, the frightening foreigner luring the child to his death. Here, Nellstone’s Hawaiians sing “The Fatal Flower Garden”, one of the “Gypsy” versions of the tale:

“Up stepped this gypsy lady,
All dressed in yellow and green;
“Come in, come in, my pretty little boy,
And get your ball again,”

In some ways, it is unsurprising that Jews and Gypsies were conflated in this manner. Both were usually very poor (though, as with Jews, the folklore also includes tales of Gypsies who enjoyed fabulous wealth, often obtained by sinister and perhaps supernatural means). Both were outcast peoples; wandering, despised. Both simply looked different. To a provincial, superstitious medieval mind, the Gypsy and the wandering Jew were more or less the same foreign, parasitic creature. The Nazis, though they subjected both to their mania for classification, made no fine distinctions in determining the ultimate destination of both peoples: the gas chambers.

In modern Europe, though antisemitism remains, Jews are not viewed in quite this way anymore. The Roma though are still capable of provoking a visceral reaction. They are still wanderers, a people without a land. They look different. In their scarves and long skirts, the women in particular seem like a throwback. Most people know almost nothing about them, though there are all too many who would be happy enough to retort “I know enough”. They do not fit in to such people’s idea of modern Europe, nor of modern Ireland, with it’s post-Celtic Tiger appetite for cruelty and callousness. They are caught in an impossible position, damned for not assimilating into a culture which doesn’t want them anyway.

So last week, when Greek police raided a Roma settlement and saw a young girl, Maria, whose appearance, blonde and blue-eyed, was markedly different from her Roma parents, the media across Europe had a whole cultural history telling them which conclusions to come to. The case is undoubtedly problematic. The girl is not their biological daughter, and their stories of how she came to live with them are inconsistent. But neither is the girl on any missing children’s list, and as yet her biological parents have not been found. It is hard to talk about abduction when there are no “real parents” to make it an issue. This is a hard, sad case. But it wouldn’t have gained much attention if not for its dark cultural resonance.

It was notable from the beginning that the media were at pains to stress the hair and eye colour of the girl. The media took to calling her the “Blue Angel”. A lot was going on here: Angelic aryan child, stolen by swarthy Gypsies; One of ours, taken by one of theirs, indoctrinated into their way of life (John Wayne in The Searchers springs to mind). Surprisingly, it took a few days for the papers to make the contemporary parallel, but they spelled it out in the end: Maddy. Now two moral panics, one ancient, one modern, were in play. An exercise in collective stupidity was inevitable. 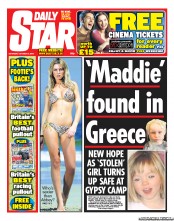 Paul Connolly is a “hard-hitting” investigative journalist. This means that he wears a leather jacket and makes “isn’t it awful?” documentaries about travellers, beggars, prostitutes – you know, the corrupt power elites of Irish life. He has form when it comes to the Roma too. In 2011 he made a film called Ireland’s Bogus Beggars which was condemned for not having any evidence to back up its claims of an organised begging business run by Roma. In the wake of the Maria story, he received this “tip-off” on Facebook: 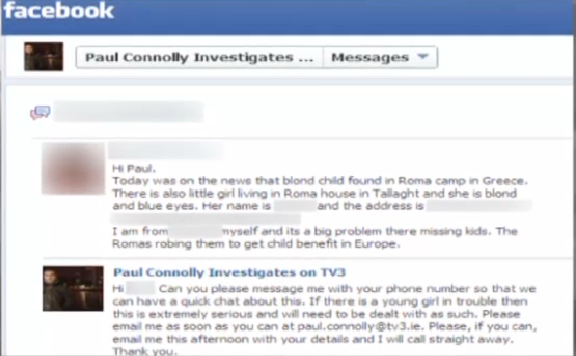 It is worth noting here that, though associated with certain parts of Europe, the Roma are as unpopular there as in any other part. So when someone claims some kind of local knowledge of them, he is as likely to be repeating an old slur as speaking with expertise. Mr. Connolly, who might have ignored the comment, or told the commenter to go to the Gardaí himself, instead passed it on to (for some reason) the Garda Press Office. The Gardaí (and their Press Office) swung into action. One can only imagine what other crimes could be solved by this this intelligence-gathering method “Guys, you won’t believe the tip-off I’ve just got from some guy on the internet – turns out the Jews were behind 9/11!”

The child in question was immediately taken into custody by the HSE, after Gardaí were unconvinced by the parent’s protestations that she was theirs. Then today it was reported that another child, also blonde, had been taken and then returned to a Roma family in Athlone. It is unclear if the Gardaí in that case had even an internet “tip-off” to go on. As we now know, both children were the biological children of their parents. Apparently Roma children can sometime be blonde. Who knew? For those who suggest that this is a case of “better safe than sorry”, I should note here that the idea that one must prove one’s parenthood of a child is an entirely new proposition, and not one that I am aware of having been applied to non-Roma parents.

Myth is a way of performing our fears. Fears, by their nature are irrational. The sheer illogic of the allegation – the difficulty of kidnapping a child, the difficulty of obtaining social welfare payments for her without arousing suspicion, the paltry financial return for such a massive risk – were overridden by the power of the myth. Children are kidnapped, but not for the purposes of Social Welfare fraud, which is more commonly and more effectively undertaken via fictitious children. Worse, a police action was apparently undertaken on a groundless hunch rooted in the racist subconscious of pre-modern Europe.

The folk singer Ewan MacColl, who was fascinated by the ballad of Sir Hugh, described it as “the barbaric functioning of medieval thinking”. The word “witch hunt” is often used in Irish public life, usually wrongly. But that is exactly what happened here today: a grotesque outbreak of ignorant peasant superstition fueled by fear and hatred. We may have left the Dark Ages, but they haven’t left us.