It cannot be easy to be an opinion columnist. No, that’s not quite true. Being an opinion columnist is incredibly easy, especially when compared to jobs such as firefighter, coalminer or deep-sea fisherman. What is difficult though, so difficult that there are only a handful of people in the world up to the task, is to be a good one.

Most people don’t have all that many opinions. We might have subjects in which our jobs or personal experience have given us a certain expertise. We might have come across a subject in passing one day and kept ourselves vaguely informed about it. Otherwise, we tend to outsource our opinions to our friends (who will have their own handfuls of areas of expertise), to political leaders, to twitter. It would be an unusually thoughtful person who came up with a dozen fully-formed original opinions per year. Expecting someone to have one of them per week, let alone per day, is unrealistic. Worse, it depletes their intellectual resources, turning them into opinion machines, wandering through the world looking for things to publicly have opinions about. This is how the columnist turns into a crank, unable take a neutral stance on anything, having (and worse, expressing) strongly held views about things that no sane person would care about at all.

Stephen Fry has spoken amusingly of his time as a newspaper columnist, and the dangerous habits of mind into which this occupation can lure one. The most dangerous trap is what he calls “the milkman’s cheery whistle”. This is the lazy tendency, when stuck for something to write about, to muse on “an object of nostalgic regret”. Whatever happened to the milkman’s cheery whistle, muses the columnist. You used to hear it every morning, back in the old days. Now, the milkman is almost a thing of the past. Shame really. Of course I’ve been buying my milk from Tesco for years now, but still, it’s sad that we’ve lost that personal touch. Seems sort of soulless really, but sure that’s modern life, isn’t it? 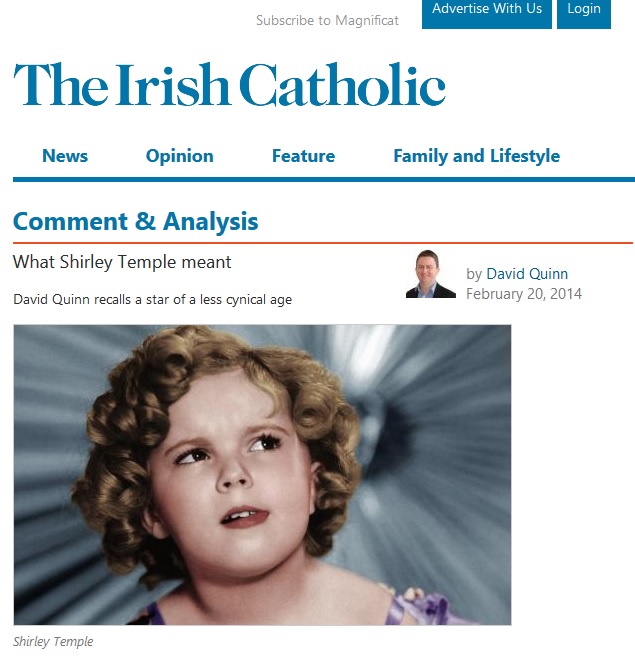 All of which may be a possible explanation for a column written recently by David Quinn for the Irish Catholic. Mr. Quinn, perhaps best known on the internet, where he is a figure alternately of fun and hatred, writes not one but two weekly columns. And he’s been at it for over a decade. You might then be forgiven for thinking that he must be a polymath, a renaissance man, his mind ranging from subject to subject, and coming up with one hundred fresh, unique observations per year. On the evidence of his most recent column, you would be wrong.

Mr. Quinn laments the recent passing of his own personal milkman’s whistle, the former child actress Shirley Temple. Aside from displaying frequent symptoms of columnist’s laziness (“The only Shirley Temple film I can actually remember properly…”) he suggests that Temple’s post -child-stardom life was a more wholesome than Miley Cyrus’. But, in this fallen age, another Shirley Temple is impossible to imagine. Of “Bright Eyes”, a movie he “can’t remember at all” but read something about, somewhere (no citation is given), he asks:

“Could a movie like that be made today? Have we become too cynical, too secular-minded? My hunch is that a movie like that, adapted slightly for modern tastes would still be popular but would probably never see the light of day because of the overt faith references”

There’s a lot to deal with in this paragraph. First, the sneaky suggestion that secularism and cynicism are somehow the same thing. Better still, the “hunch” that Hollywood won’t give the people the pious, wholesome films they want (presumably because the movie industry hates to make money). Finally, the realisation that this entire fantasy, where Hollywood for some reason produces a remake of “Bright Eyes” only to suppress it, is based on a film Mr. Quinn admits to never having seen.

It is almost poignant, this sadness that the word has become so cynical. Things were better in the days of “Bright Eyes”.

In that less cynical age, Graham Greene wrote (and was sued for his trouble) that Shirley Temple’s appeal was essentially paedophilic in nature. Certainly, it is hard to imagine a contemporary child star glammed up the way Shirley Temple was (think of the Minipops debacle). Is that concern for sexualisation of children modern cynicism, or a better awareness of something we should have been more worried about all along?

In that less cynical age, the world saw the Great Depression, World War II and the Holocaust.

In that less cynical age, there wasn’t so much in the media about demands for gay rights, and drag queens didn’t presume to enter public debate. But they still existed. The only difference is that now Mr. Quinn is hearing about them.

The world of your childhood was simpler, not because it was a simpler time, but because you were a child then. If it seems to you that in your childhood there was less alcoholism, infidelity and domestic violence, it’s probably because people don’t talk about those things in front of children. If it seems to you that things – rights for gay people, political correctness – have gone too far, you need to ask yourself at what point in history they had they gone exactly far enough. If it seems to you that there was ever such a thing as a less cynical age, that is entirely human and natural. Sit down, watch a Shirley Temple film (or whatever cultural comfort food you prefer) and wallow for a short moment in old, illusory certainties. Then turn the TV off, and go outside into the modern world, where you have to live whether you like it or not.