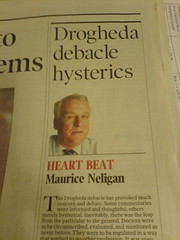 Maurice Neligan is a cardiac surgeon. He has a column in the Irish Times Health Supplement.

The column on the right is from the 21st March.

The Drogheda debacle has provoked much concern and debate. Some commentaries were informed and thoughtful, others were merely hysterical.

Hysterical. A poor choice of words I would have thought, given its root. Or, perhaps, a telling one.

Doctors were to be circumscribed, evaluated and monitored in a way that applied to no other profession. It was even proposed that there be a lay majority on the Medical Council.

…
There were strident calls from some quarters for what was termed ‘a whistleblower’s charter’, for whistleblower, read informer…If someone has serious allegations to make they should be prepared to stand over them. They should also understand the subject matter about which they are implying malfeasance.

…
Informers have a poor track record in Irish life and I do not think special protection is warrented. If somebody has concerns, let them voice them and in substantiating them lies their protection.

From the Neary Report, (pp 32-33) let’s look and see what happened there when people voiced their concerns.

No one made a formal complaint and no one questioned openly.

Footnote 2: A patient complained about Dr. Neary through her Solicitor in 1980. She did not proceed as she had been assured in legal correspondence that an obstetric hysterectomy was extremely rare and only carried out in the presence of an intractable haemorrhage. Another patient engaged a Solicitor 1998 complaining of her treatment, including peripartum hysterectomy, carried out in January of the same year.
Footnote 3: A junior anaesthetist who had completed 6 months training at the Coombe was very seriously concerned in early 1998.
Footnote 4: Several junior midwives were concerned from 1996 and especially when a midwife who had trained outside the Lourdes joined the staff in 1997.
Footnote 5: One of the pathologists had concerns in 1981. Another and recently appointed pathologist had serious concerns in 1998.
Footnote 6: The Matron of the Maternity Unit was concerned in 1979 and 1980 and again in the mid 1990s
Footnote 7: A temporary tutor who was also a sister in the MMMs tried to voice concerns in 1980

And yet all these concerns trailed into the sand.

Dr Neligan closed his column with this patient friendly thought.

We’re still going to need the doctors for a while and maybe it would not be a good idea to piss them off unnecessarily.