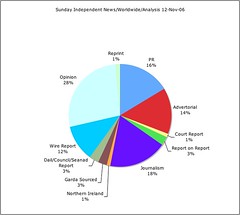 As many will know by now, having been linked to from Bloggorah of all places, the wiki notes for the Sunday Independent are complete. What to say? Where to start (and this isn’t my first attempt at a wee Sindo blurb for the Tuppenceworth Paper Round project by the agonised way)?

It was no surprise to find that the Sindo was completely shite, sure. But it’s important to note that this bad boy claims a readership of the order of 1.3 million and as such is an extremely influential publication. It’s an influence the paper is unafraid to exploit for its own ends; ends which are of dubious service to the public interest. But to what extent does it also service the egos of its readers and both reflect and manipulate the image of 21st century middle-class (east coast) Ireland?

Media organs tend to represent aspects of the ways in which a nation sees itself. The BBC, the Guardian, and the Telegraph represent aspects of British national personality which compete in the marketplace of ideas to serve and perhaps even help to consitute audience identity. This can be a strength and a weakness given the structural and resource commitments required to build such a personality off or even online. The Guardian has demonstrated remarkable agility in the UK market and built a strong audience share by representing a version of Englishness (rather than Britishness per se) which is both progressive and comforting. It’s what Hobbits would read if they were transported to modern-day Islington. Unlike the Mail or Express, it has its cake and eats it because while it’s aware of the flaws of modern Britain and its place in the world, it doesn’t make it feel like shit to be an Englishman.

But it cost millions and took faith and imagination to launch its successful web model and change its printing presses to knock out the winning Berliner format. Fox News in the States is another successful, if less admirable, example of a media outlet which both serves and shapes a particular (unattractive) aspect of the American personality.

The Irish Press died when the aspect of Irish national identity it represented (and this isn’t to say it completely evaoporated; far from it) underwent a personality change. While the immediate cause of death was an odd industrial dispute, it ultimately didn’t survive because it lacked the resources (£20 million debts) and perhaps the imagination to change. The Press represented the old dominant strain in the Fianna Fáil tribe (see Colm Toibin’s The Heather Blazing for details), but – irony of ironies – it failed to read the writing on the wall, which legend was digested with alacrity by its once Fine-Gaelian competitor in the national identity stakes, The Independent, especially in its Sunday iteration.

A quick scan down the wiki is enough to demonstrate that it is to that nebulous FF-ish unideological Irishness to which the Sindo seeks to speak. And 1.3 million readers say it’s depressingly good at it too. Two of its columnists in this issue were Fianna Fáil politicians and most of its quotes of the week were from Ffers (I know it was Ard Fheis time, but still). Bertie Ahern is the subject of an image-building strokejob by Barry Egan. A Fianna Fáil councillor opines wretchedly that “eye-brow raising activities??? among the developer community are “a great job??? for the people of Naas, Rathcoole and Citywest.

Almost every opinion piece of a politcal nature read like an open letter to the Cabinet setting out the paper’s demands and made no effort whatsoever to enlighten its supposed target audience, the 1.3 million schmos who shell out after Sunday mass in the hope of some sort of enlightenment on the state of the nation. That’s not on the agenda at all. Alan Ruddock hectors and bullies for a referendum on strict liability for underage sex, Elis O’Hanlon hectors and bullies against a referendum on children’s rights, and everybody else hectors and bullies on stamp duty in an effort to kickstart failing revenues for the Independent stable’s property supplements.

No news, just spin and manipulation of Government policy in the service not of the people but of the shareholders of a corporation. And Dr. Sir AJF O’Reilly says only print journalism is worthy of trust!

While the Guardian employs disparate voices in the interests of balance and to create its attractive current tone (Charles Moore and Peregrine Worsthorne for example), the Sindo’s attempts at something similar merely sound psychotically dissonant. On one page, Emer O’Kelly decries the slatternly impact of “Equality??? on women while on the next sexy older women are celebrated for their liberation from the age-old shakles of social decorum. This doesn’t work because both voices are designed to disconcert female readers and appeal to the worst in people. Women reading this are made to feel like sluts on one hand and as less than physically fabulous on the other. Result – profit for Brown Thomas and Paris Hilton.

If the Sunday Independent reflects the average noughties Irish punter, he or she is an awful prick – hysterical, hypocritical, venal, bigoted, reactionary, philistine and passive aggressively manipulative. I’ve seen these fuckers down the pub, but this is the last time I’ll be inviting one into my home.

What remains to be seen is how long it can last. Ireland is again in a period of transition and it isn’t just property price rises that are unsustainable. How long will it be before the average Irish man or woman wakes up to themselves and stops thinking like the wretched and chippy Mr. Brendan O’Connor? How long before broadband roll-out reaches its tipping point and a majority of ABC1s head online?

I don’t think the Sindo will be able to change its tone quite so successfully as it did in the mid-1990s when it destroyed the Rainbow coalition and manipulated the election outcome with lies about Ruari Quinn’s performance and post-polling aims as Finance Minister. For one thing, it’s voice is incredibly monotonous and its colours are nailed firmly to its masthead. Nor does it seem to be able to accept that the days of newsprint, while not over by any means, are certainly numbered. Yet, the Independent Group continues to denigrate the Internet and its lord and master has only just stopped fouling up the works in Eircom.

If Ireland changes for the better and the Irish personality becomes somewhat more grown up and balanced, will the Sindo meet us online and embrace us as fellow Pauline converts? On the basis of this evidence, it seems unlikely.

PS – A couple of notes from the wiki to whet your appetite:

Page 1 (story c) – (c) Photo of severe woman decked out in unfortunate red toga affair. “Most beautiful exectutive in the car business”. No source cited for quote, but then again the competition is hatchet-faced parvenue, Bill Cullen. He does have lovely legs though. This is advert for her shop. A shop which is the subject of heavy advertorial on page 4. As Clint Velour would sing (in the style of Kraftwerk), she looks like a model but she works in Spar.

Page 10 (story b) Boorman Living the Tiger Dream! What a prick! How dare he! According to the Sindo, a certain level of material success precludes one from observing the negative aspects of Celtic tygger (see Living Section for details, frankly). Describes him as living a gated-lifestyle, which just means he has a gate at the end of his driveway as we can see from hilarious accompanying photo of hard-bitten journo Larissa Nolan standing in front of it on her mobile – obviously trying to negotiate entry in some kind of reverse seige (he is beseiging her out from inside, dammit) as if some dolly bird from muck-racking rag has a right to roll up to the man’s gaffe and demand entry to confront him with evidence of brill Celtic tygger influence on, for example, the Sindo. See most beautiful car executive in Ireland ever for details. He’s making a movie about a dodgy developer.