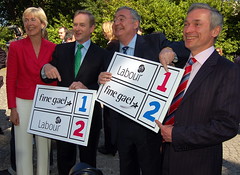 Originally uploaded by The Labour Party.

It’s voting day today. The sun is shining in Dublin. All over the country people are going to find time to put ones, twos and threes and so on down the list of names who want to represent them.

The last few days of the Election campaign have seen almost a complete breakdown of argument. We’ve been left with bluster and wind.

So let’s ignore it. The poor souls have to do something to try and convince themselves they can control their fate. Imagine the insecurity of knowing that at the end of the week the entire country was going to let you know what they thought of how you were doing in your job.

Away from the frenzy of the election-stepping back for a moment- things get much clearer. We’ve had a government led by Fianna Fáil for 17.5 of the last 20 years. There have been great achievements in that time. It would be churlish to deny that.

But there have been terrible blind spots as well- areas which didn’t get the attention they ought to have. And if the same faces come back, they still won’t see the people standing in those blind spots. We have to correct our course- put things right in planning, health and transport. I’ve a son now. It’s important to take the long view.

By definition the opposition have focussed on the areas where the government has failed. Those issues will be to the forefront of their minds when they get in. For the risk adverse, there is the comforting thought that all the experience of the day to day running of the government resides in the Civil Service. Believe me, they could keep the state ticking over for years.

But ticking over isn’t enough. We need those new eyes. We need the new voices. And we need a new government