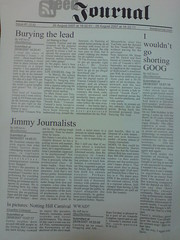 Well, there was a great reaction to my Newsbox idea(s) on a personalised newspaper complete with context and location specific advertising.

One of the issues raised in the comments was the feasibility of automatic layout for articles of varying length, along with their headlines etc.

As proof that there is nothing new under the sun, I went looking for a programme which would do exactly that. It turns out that there is one. FeedJournal, by Jonas Martinsson, is an RSS reader that takes your rss feeds in and formats them into a newspaper like layout in pdf format.

Currently it only works on Windows XP or Windows 2000, so I’ve only had a short opportunity to play with it. But while it could use polish, and a nicer user interface and would benefit from giving me lots more options as to how my newspaper looked it is, despite all that, pretty much what the doctor ordered.

Currently Mr. Martinsson, who won a Microsoft-sponsored competition with FeedJournal, says that he intends to turn the programme into a web-based service as well. If he did that, I think we might be one step closer to having a Newsbox newspaper that we could all enjoy.

UPDATE: Niall Byrne talks to Mr. Martinsson for Silicon Republic about those plans for a web service. Only the freshest news here on tuppenceworth.