Heart of Glass + Bottle of Champagne 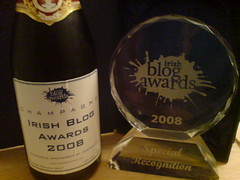 The Irish Blog Awards on Saturday night were the highlight of the nerd calendar they always are. However, there was a particular unexpected excitement this year, as Fergal has said.I was literally speechless as I walked up to pick up my award- a Special Recognition one. There hadn’t even been a nominations list to alert me that I needed to start planning something to say. It was just a general award for being brilliant- like they give you at the Oscars if you’re about to die.

The speech I did make had only brevity in its favour. I think I tried to talk about community and voices. I seem to remember singing We Are The World.

So I’d like to belatedly thank Embarr, for not just putting up with all my enthusiasms but encouraging them, Fergal and Copernicus, who did all the best Paper Round essays anyway and Antoin, who did all the hard setup work with VoteTube. And, Damien of course, who shows the huge impact a committed person can have in a small country.

Great fun was had by all. A special hello to Sinead Gleeson, David Maybury (who expected me to recognise him, even though he doesn’t comment with a photo or even under his own name here) Fustar and Daragh and Sinead, Gareth (whose encomium the next day made me blush standing in my kitchen as I read it, as well as wonder which Fictional Character he’d met who was smarter than me) the Beaut.ie girls (and most of their entourage, some of whom I used to work with, believe it or believe it not) and Gavin and Anthony Sheridan (who wanted me to justify professional self-regulation to them). Big regrets to Fustar’s wife Jess who was struck down with the Sick and couldn’t leave Limerick.

And a special thank you to my father, who I tricked into agreeing to babysit, even though he was nominated for Best Business Blog. I comforted him later by telling him that Ice Cream will always be more popular than litigation.

And Finally: Rick O’Shea is lovely, and I’m glad he’s won something for something he’s done. But really, Fustar Woz Robbed!