Welcome to the launch of the Obsessive Blogger Badge, soon to be the most coveted lapel decoration in all the land. I’m giving them away for free, and all you have to do is complain about something! 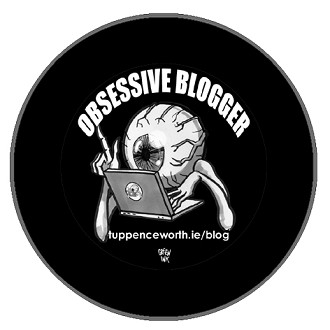 We live in a one-party country. There’s no point in whining about that. We can go out and vote for opposition parties every few years, but when Fianna Fáil have a core of 40% odd, they have an in-built head start that makes a non-Fianna Fáil government a very rare occurrence. Add to this that our main opposition party has no higher mission than to be like Fianna Fáil and you have few enough reasons to believe in the power of politics to transform our society. But sitting around complacently saying “don’t blame me, I voted for the opposition??? is inexcusable, especially when one considers that those most in need in Ireland didn’t vote at all. There is plenty you can do outside of the established power structure.

Some months ago, I read this post by Gingerpixel. It was about how one day she decided to do something constructive, met more people who felt the same, and some months and much hard work later, had created, out of nothing but energy and commitment, the beginnings of a non-denominational school. I have carried that post around in my head ever since, as an inspiring example of how the web can bring together people who might never otherwise have known about each other; about what those people can get done if they share the same obsession. This is true creativity, putting something into the world that wasn’t there before. Every year at the blog awards, I feel the same inspiration and encouragement. Where would bloggers be without our hobbyhorses? Where would anyone be?

Tom Kitt TD had a go recently at “Obsessive Bloggers??? who were getting all annoying by knowing things and by caring about stuff. This dissatisfaction with the lack of ignorance and apathy in society would, in a better run country, be shocking to hear from the Information Society Minister. In Ireland, it comes as no surprise. An Information Society is an informed society. And there is nothing a politician hates and fears more than an informed citizen. The informed citizen knows her subject better than the minister, sees through the Civil-Service-written answers the minister parrots, just won’t shut up and let it go. The informed citizen may not care about anything else except her pet issue, but that’s fine, she still has one more pet issue than the uninformed citizen. The informed citizen is often the only reason anything gets done in this country. She needn’t be an activist, or a party-politically aware person. In fact political parties are far too often a way of luring the energetic and public-spirited into a branch meeting where the energy and public spirit are snuffed out by embittered constituency hacks. If those energised by active citizenship can get some traction in political parties that’s all to the good. If not, it’s nobody’s loss but the parties’.

The informed citizen, I find more and more these days, is online. We who blog and read blogs have before us a unique tool to make a difference, even if it’s only a small one, even if our obsession is a narrow one. We have a ready-made network at our disposal, a group of extremely smart and talented and energetic people on whose help we can call. Politicians and the media are fond of repeating that there is widespread apathy in Irish society, as if caring about party politics was the be-all and end-all of social commitment. But we know better, because every day our RSS readers bring us fresh evidence to the contrary. People care, and they care enough to do more than bitch about it. Again and again, I’ve watched it happen: Someone has an idea which they express online. Other people read the idea and decide they agree. Before you know it, people are emailing back and forth, then meeting in person, and then, out of nowhere, things start happening.

But they don’t start happening without a bit of healthy obsession, so in recognition of the Obsessive Blogger, I’ve taken the small step of making up some badges to be awarded for public service blogging. Long term I have plans to take this further, to try to build a community where people can find others who share their obsession, and where those with energy or skills can find good causes who can use them. But for now, I’ll give a badge (on the design above by the wonderful Green Ink, as well as a more rough-and-ready design by myself) to anyone who writes a blog post that seems to me worthy of recognition. If you wish to nominate yourself or another blogger, please do so at obsessed[AT]tuppenceworth[DOT]ie.