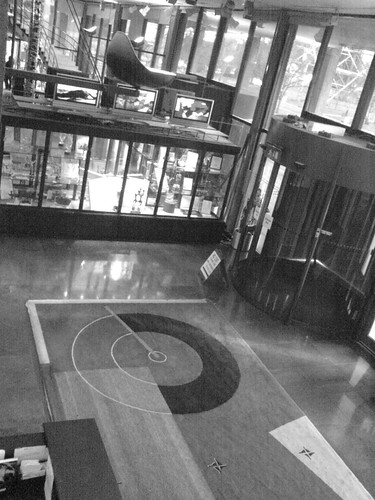 A quick timeline of what we have on the initial stages (all correct I think):

March 7th: Casby hangs his first painting in the National Gallery (at some stage during the day the NG contact the Guards – as is, apparently, standard practice after such a “security breach”.)

March 8th: He hangs his 2nd painting in RHA (This is pulled and stashed in an office by Patrick Murphy – director of gallery. He DOESN’T contact Guards.)

Then it gets a bit muddled. Sometime between the 9th and the 22nd (when the Tribune ran the initial story) Casby emailed the Tribune using the alias “Topsy Campbell” . He told them about the TWO paintings and included images. This allowed a connection to be made to the NG incident they already knew about.

The guards only seem to have realised that the RHA had been similarly trespassed upon after the Tribune article (and this seems to be down to Casby’s own email to the Tribune!).

Between the incident in the National Gallery (reported to the guards) and the Tribune article nothing, it seems, was done by the Gardai. We don’t know if it was the article or the RTE coverage that led to someone telling the guards to go to RHA and seize the 2nd painting?

March 23rd: between 9.30pm and 11.30pm:
Of his own accord, and utterly using his own judgement, Ed Mulhall spontaneously decides that the report was “in bad taste and inappropriate”. He directs that it not be repeated on the late news on RTE2. We don’t know if he was aware of what was in the main evening news but changed his mind about it when he say it on TV, or whether he didn’t know what was on the news and only saw it for the first time at broadcast.

After Eoghan O’Neachtain’s phone call the web record of the broadcast is altered repeatedly. The captions to the still photos are rewritten. The link to the video of the report is first broken and then removed altogether. The captioned pictures are then removed entirely.

Either March 23rd or March 24th (pre 6.28pm): Ed Mulhall makes the, as far as we can know, unprecedented decision to run an apology for a factually accurate report on the 9 O’Clock News. Again, he does this without any thoughts in his mind, except a concern that RTE News had accidentally crossed an invisible line nobody knew was there which made it unacceptable for the State Broadcaster to raise a laugh at the expense of the Taoisech’s person. Brian Cowen has never complained to RTE about the original report.

The web record of the broadcast is completely removed from the RTE site, though all the videos are still available on YouTube.

March 25th: The #picturegate tag starts trending strongly on twitter. It becomes the number one topic in the world. It holds that position throughout the next 4 days.

“A detective from Pearse Street Garda visited Today FM and demanded all emails from the artist including images of the portraits which had been sent to the Ray Darcy Show.

On his show yesterday morning, Darcy said the show’s producer Will Hanafin had spoken with the detective who had told him that “the powers that be want action taken”.

Mr Hanafin said he was told that the gardaí wanted the name and contact details of the artist so they could caution him. The detective said the artist was being investigated in connection with three charges in connection with incitement to hatred, indecency and criminal damage – for hammering a nail into the wall of the National Gallery.

When Mr Hanafin declined to pass the information on, he was told a warrant would have to be sought to get access to the show’s emails.”

Mr Casby is questioned by gardaí under caution after he voluntarily accompanied investigators to Pearse Street Garda Station. Five of his other paintings of public figures which he had brought with him are confiscated by the police.

March 26th: Having been the number 1 topic on Twitter for a day, Picturegate story runs in

And doubtless hundreds of other outlets.

March 27th: RTE Public Affairs confirms it has received twice as many complaints about their apology (over 100) than they had about running the original report. We are told that the decision to run an apology was taken by Senior Management.

March 30th: Australian broadcaster ABC news runs a story on their website on “Censorship concerns in Ireland”. It explicitly cites the ongoing interest in Twitter and Facebook as a gauge of public reaction and quotes from bloggers.

Fintin O’Toole writes in his column :

“Will Hanafin at Today FM says he was told by a garda that “the powers that be want action taken”.

If those powers are simply over-zealous officers within the force, a public apology is in order, not least to the unfortunate gardaí who were employed in such humiliating abuse of their professional skills. If they are at high levels within the Garda, there must be accountability for a gross misuse of power and resources. If they are at a governmental level, we are back in the days of Seán Doherty and political pressure on the Garda.

In that case, this is a matter serious enough for resignation.”

April 1st: #picturegate article is chosen to run on the Wikipedia front page.

RTE confirms publicly for the first time that it was Ed Mulhall, MD of News in RTE who ordered an apology be broadcast.

Not the final word on the matter. If anyone can fill in blanks, or thinks I missed a twist or turn please leave a comment below. This time line was assembled by myself and Fustar.