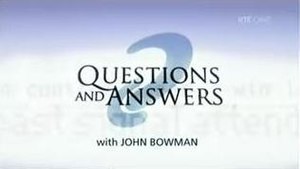 I was an audience member for RTE’s Questions & Answers on two occasions. I can remember almost nothing about either program. The first time, I think Mary O’Rourke was a panelist. The second, Joe Higgins and Michael McDowell were on. They probably had a row. I can’t remember.

What I do remember is the hour or so before the show. We milled around in a too-small reception room and ate hors d’oeurves and drank wine. A producer arrived in and silenced the room. She thanked us for coming, and told us that she wanted questions on a small number of topics. The economy, the north, the health service, the “funny” one, the usual. All of these topics were to do with what was in the newspapers that week. We wrote out the questions we had been told to ask and went back to our prawn sandwiches. The producer returned and told a few of us that our version of the questions they had told us to ask was chosen to be put to the panel.

We were herded into the studio. John Bowman came out and welcomed us, and then introduced the panel to us. He asked us to bear with him as each panelist was asked to speak for a moment or two so that the sound crew could get the microphone levels right. I vaguely recall that Michael McDowell spoke about the weather. Joe Higgins talked about the traffic out to Montrose. He may have used the term “neo-liberal”.

The filming commenced. The chosen guests asked the questions they had been told to ask. Most framed their questions in cute, pun-based terms. Given that the producers and researchers plucked the topics from the week’s news coverage, it is no surprise that they chose questions that most resembled the language of political correspondant’s columns. The panelists responded in more or less the terms they might have been expected to respond in. The audience participants gave away their political allegiances by clapping a little too loudly at unremarkable contributionss from their representatives. Contributions from the floor were mostly openly partisan. The filming ended. We left, none the wiser.

I have watched Q & A maybe a half a dozen times in the past half-dozen years. The rehearsed and unreal nature of the program made it a largely irrelevant ritual. Panelists might as well have shown up and responded to each question with a link to the relevant policy page of their organisation’s website. Each was clearly present as a representative of an interest, a mouthpiece whose job it was to repeat certain positions rather than to respond to questions or to engage in debate. The panel would usually be made of a member each of Fianna Fail and Fine Gael, a Labour member or Union or NGO rep, a journalist or lawyer, and a mystery guest. The mystery guest could be anything from a businessman to the head of a lobby group to a Director of one of the dizzying number of quangos which sprang up in the Ahern era. The important thing for the viewer to know was that the mystery guest was a second Fianna Fail panelist, flying under neutral colours. Everyone would say their piece in exactly the terms that we expected of them, Pat Rabbitte would make one of those jokes of his, and we could all have a chuckle and go home. Nothing ever got debated. No minds were changed, no ideas developed. Wherever possible, John Bowman would steer discussion away from the issue at hand to how that issue might affect opinion polls and political alliances. The stakes could not have been lower. The National Conversation could not have been more badly served.

I watched last night’s final edition of the show. Fittingly, the show featured no questions, finally achieving balance with the dearth of answers in all previous episodes. About five minutes of interesting comment could be distilled from the three panels RTE wheeled out for our delectation. Moments from the past were replayed. There was a montage of questions being asked by audience members who are now public figures, which suggests that Q & A even now thinks its greatest weakness – the exclusion of ordinary citizens in favour of party hacks – was some kind of strength. There was a look at the episode during the 1990 presidential election that lead to Brian Lenihan’s downfall. That moment was rehearsed too, a fact that was acknowledged, but not commented on in terms of what it said about the program itself. 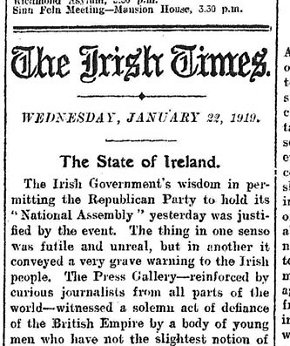 This is the notional conversation. A small group of politicians, journalists, lobbyists, press officers, lawyers and businessmen talk to and about each other. PR people brief the papers. Broadcasters follow up the story by interviewing Politicians. Sometimes they even interview the journalists. Occasionally, journalists interview broadcasters. The media moments thereby created are fed back into the system, and the papers will write entire articles about the reaction to such moments. This is usually a matter of talking to a few backbenchers and some other journalists. The citizen remains unconsulted. Thus is the mood of Doheny & Nesbitt’s confused for the mood of the nation.

There was an election a while ago. You may remember it. The country appears more than usually schizophrenic during election campaigns. On the one hand party leaders travel the length and breadth of the country getting stupid photographs taken of themselves for the benefit of the media who tag along. At the end of each day, journalists decide whether each party had a good day or a bad day. One can only imagine this is done either on a hunch basis, or by a collaborative process whereby the entire press corps comes to a consensus on the matter.

“By punishing Fianna Fail and rewarding Labour, the voters have done another Lisbon, that is, done something they are already regretting.”

One ought not to expect sanity from Harris, but the patrician arrogance of this sentence is breath-taking. Here we have a man who, offered the evidence of his own eyes, an actual election of actual citizens who cast actual votes, prefers to ignore it. He knows what we think, and he doesn’t need any vulgar elections to figure it out, anymore than he needed one to get into the Senate. The column, by the end, sounds a bit like the impromptu speeches insane dictators make to their underlings:

“Since I amplified my early Sunday Independent position on Newstalk, some of the pundits seem to be shifting their positions .In short, I am helping to set a new agenda, one that puts the results in a more realistic perspective.”

The voters were wrong. The pundits must put things in perspective. The ugly interruption by the citizenry will soon be forgotten about. It’s not like they count anyway. Why, some of them don’t even appear on Questions and Answers. 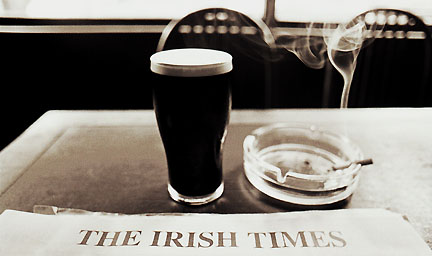 Ah yes, Questions and Answers. The distaste of the media establishment for the rude interruption of reality into their circular narrative was displayed in last night’s final edition. Some months ago now, a man named Michael O’Brian made a passionate, eloquent and upsetting contribution to the program following the release of the Ryan Report. He burned through the screen, and through the rehearsed, Carr Communications-tested verbiage that made up most of the program. It was compelling because it summed up the fury felt by the Irish people at the contents of the report. For a brief, intense moment, the National Conversation and the notional conversation intersected.

Last night, having run various greatest hits and dissected them in studio, Q & A replayed Mr. O’Brien’s short speech. They went to the panel for reaction. The talking heads spoke of it as a powerful moment of television. One described where she was when she saw it. I cannot tell you how nauseated I was by this treatment. This poor man’s cry of hurt and anger was being turned into a TV moment. It was being treated like Ray Houghton’s goal against England in 1988.

The notional conversation was having its revenge. When real people intervene in the notional conversation, they need very quickly to be made less real, to be turned into a media talking point. Susie Long has had her name degraded by being constantly used as a catchphrase. Mr. O’Brien, who has surely suffered enough, is going through the same process.

Nothing real can survive for long in the notional conversation. Election results are discounted. Ideas are ridiculed. Moments of feeling and reality are cheapened and degraded. This is done by people who consider themselves in tune with the nation, who write and talk about the mood of the people for their living.

Eamonn De Valera used to say that when he wanted to know what the Irish people wanted, he needed only to look into his heart. In the notional conversation, the same approach is adopted. Though in today’s less deferential times, it might more vulgarly be said that it is less a matter of looking into one’s heart than of pulling it out of your arse.