Home / General / Do Not Want 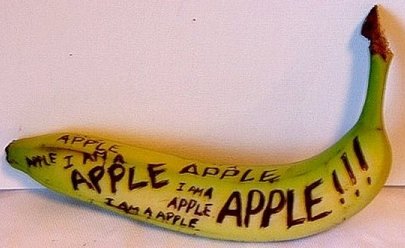 The part of the tale of the Emperor’s New Clothes that is often forgotten is what happens after the little boy in the crowd shouts his heresy. You might think that his shout would break the spell, and the brute reality would dawn on all participants, the king suddenly grabbing a coat from a minion to preserve his modesty. But the tale in fact ends with the Emperor continuing to parade down the street, as convinced as ever that he is wearing a suit of the finest, the rarest of all cloth. Some of the bystanders, probably somewhere in the region of 17% of them, probably agreed.

When small children are presented with a situation they don’t like, they do not resort to reason. Rather, they repeatedly assert what they want. “You have to go to bed” “No” “Why not?” “Because I don’t want to”. In place of argument, desire. Most of us get past that stage sooner or later, but the last few years have shown us that when adults spend time in an environment where they need only want something for it to be granted them, they regress to the logic of four-year olds. For the past decade, Irish business culture was a casino where everybody was entitled, as of right, to win. In consequence, everyone forgot how to make money the old-fashioned way. The effect of this fantasy is plain to see in TV3’s The Apprentice, a brilliant satire on what now passes for an Irish business culture, a world where commitment, hunger and determination (all synonyms for wanting) are valued above skill, intelligence or any other real-world attribute.

For some years now, this denial and fantasy have been the dominant attitudes, not just of the Irish Government but of the country’s establishment as a whole. When house prices began in 2007 to stall, it was assumed to be a temporary difficulty. The fact that property bubbles were bursting all over the world was apparently of no account. All that was needed was a kick-start in the form of an abolition of Stamp Duty, and the market would be off again. In the next budget, the government obliged, and abolished stamp duty for first-time buyers. And yet nothing happened. The market hung in the air, legs spinning like a cartoon character who has just run off a cliff. Developers began offering free kitchens, cars, or most bizarrely of all, foreign apartments as bonus gifts to those purchasing apartments. This curious practice was itself a form of denial: most purchasers would rather have a cheaper apartment and the freedom to choose their own car or kitchen, but that would have involved an acknowledgement of reality, in the form of a drop in prices.

With an election on the way, the Government were not likely to upset this collective denial. They told us that, yes, there was some slight turbulence ahead, but that things would be more or less okay, so long as we gave them another term in the cockpit. Always suckers for a reassuring narrative, the voters gave Fianna Fáil their biggest seat return in years. All was, the nation told itself, right with the world. Bertie Ahern would shortly leave us in the hands of Brian Cowen. Cowen, we were assured, was both a decent man and a clever one. To ask for evidence of either assertion was not only naïve, it was a personal insult to the man himself. This was the official narrative, it was therefore the truth. By then though, the pretence was wearing thin. But just because reality can no longer be ignored, that doesn’t mean it can’t be denied.

And so we moved to phase two: The Government went from denying the crisis to assuring us that it was almost over, without spending so much as a moment in between (this technique was repeated today, when the IMF’s arrival was touted as a positive, without it’s existence ever being formally acknowledged). Or, to put it another way, they passed from one fantasy to another, without spending a moment in reality. Brian Lenihan announced that “the worst is over”, and the Great Recovery Delusion began, as Ireland entered its Magical Thinking era.

The sheer profusion of fantasy plans for recovery was dazzling. With reality so unpalatable, there was little resistance to comforting fairy tales that told us we were all geniuses who could save the nation with a little positive thinking. I take some small, grim pride in spotting this phenomenon early, and Simon should take more in his campaign to draw attention to the dubious aspects of the Your Country Your Call scheme, but we were never going to do serious damage to the fairy tale. When people are scared, they tell reassuring stories. It takes more than a blog post, even here on Ireland’s finest and least read blog, to impose reality on those determined to deny it.

Which brings us to the bizarre spectacle of the past week. I need not go into the great many occasions when our Government misled us as to the true condition of our economy, and were assisted in this by RTE and many of our newspapers. In almost all cases, the people doing the misleading knew what they were doing. They didn’t believe a word they were saying. But this was not always simple lying. There was also at work what I suppose we must call a method. This was an attempt, albeit doomed, to con the market. So used to defining the terms of reality within Ireland, our rulers thought they could do the same on a European or even global level. They were attempting to make their statements true simply through repetition and confidence, or in other words by wanting it enough. Confronted with reports that talks were going on between Ireland and the IMF, Dermot Ahern said

The logic at work here is, literally, fantastic. Obvious, verified facts are simply not true, because we want a different reality. Try it on a shop sometime: Your claim that my credit card has been rejected is fiction, because what I want to do is get on with the business of buying that nice suit.

Meanwhile, Mary Harney announced yesterday that the situation the country finds itself in is “unacceptable” She presumably will respond by refusing to accept it. Perhaps she will close her eyes and pretend to be somewhere else. Her cabinet colleague Mary Coughlan did much the same when she pronounced Ireland’s corporation tax rate “non-negotiable”. Ms. Coughlan has little choice in what comes up for negotiation with the IMF, and putting her hands over her ears and going “lalala” when the topic is raised is unlikely to change that.

There is much to fear from the IMF, and some things to dread. They will destroy many things, not all of which deserve to be destroyed. But a small consolation will be the spectacle of a fantasy colliding with reality. Fianna Fáil has been getting high on its own supply for over a decade, and like all addicts, has only increased its habit as the realities of the real world close in on it. But the comforts of fantasy are about to be denied them. There will be little sympathy from those of us who have had to live in the real world all along.