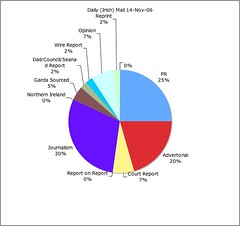 The Raw Notes on this paper are now available on the wiki. This represents the full paper, as opposed to the Irish Times graph below, which only covers the Home News pages for Friday.

You’ll see that the graph on the right appears to have a considerable slice of actual journalism shown. Don’t forget that this makes no distinction between good and bad journalism.

The numbers here are flattered by the reliance of the Mail on stories of the ‘Isn’t it awful’ school, all of which I have included. And they are awful, and real stories. But the relish that they bring to their coverage is distasteful. If there’s a mother of a dead child to be milked for tragedy, or a mourning community to be paraded, the Mail are fearlessly to the fore. In addition I have classed Opinion columns as journalism for the purposes of this graph.

Journalism of actual originality and value is rather more scarce. In this edition, I would say there were two stories in news and then some on gardening at the back.

Note also that large red wedge, missing entirely from the Irish Times’ pie. This represents a number of articles which were nothing more than adverts for one commercial product or service or another.

UPDATE: I’ve rebaked the pie chart. Opinion now is broken out from journalism. I also broke out reprints of stories that appeared elsewhere. If you’d like to see the original pie chart referred to above, you can go to here