Paper Round: The Indo’s Response? 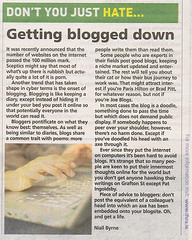 Paper Round: The Indo’s Response?

For all our education and enlightenment, I thought I’d highlight this slightly peculiar article which appeared in Thursday’s Irish Independent. (brought to our attention by Travors. Many thanks.)

You might not have spotted it, as it is tucked inside a huge piece of advertorial for the Irish Financial Services Regulator.

It ends on a wintery, sinister note. Shades of solstice sacrifice are invoked. A moral becomes clear.

‘A piece of advice to bloggers: Don’t post the equivalent of a colleague’s head into which an axe has been embedded onto your blogsite. Oh, and get a life’

So sayth the Irish Independent.

Update: I can’t believe I missed quoting the best line: “Ever since they put the Internet on computers…”