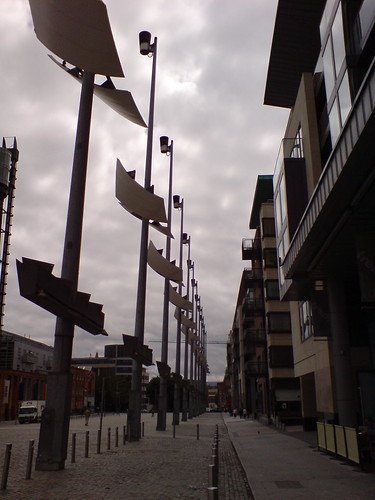 Smithfield: Buildings, but no people, originally uploaded by Editor_Tupp.

Smithfield is a failed space.

The property developer is in trouble. The way things are starting to shape up, it looks like it will end up being mostly owned by the state. But of more immediate interest, and importance, is that the area (near my office, I should say) is failing to cater for the people who live and work there.

One side of the square has the Children’s Court, a hotel which has repeatedly failed, a lovely tourist attraction (the chimney) which is only erratically open. An ailing or closed video shop and spar complete the picture.

Facing them, is a network of new little streets and retail boxes, topped by multiple stories of apartments. Most of the former are obviously empty.

When, rather than if at this stage, the National Asset Management Agency takes control of all this property, what will it do with it? Will it seek to maximise the state’s assets- shutting down tenants who are unforthcoming with rents?

Where does this get us all? A public space driven further towards desolation. Even less reason for potential apartment purchasers to want to live there. Nobody going there. Nobody gains.

So, I’d like to propose a new way to think about these ‘property assets’, which are also the towns and cities we all have to live in. If we accept that the tide has gone out, and won’t be back for a while at least, then trying to charge commercial level rents in an area with a desert of footfall is counterproductive.

Retail units stay empty. Nobody wants to go there because nobody is there. The retail that is there suffers, consequently. The landlord makes less money by looking for more.

Smithfield, as it stands, can’t maintain the required number of commercial enterprises to make it a viable place to live or work.

I propose that it sets out to become a home to UnCommercial Enterprises.

By that I don’t mean that they would all be not-for-profits or that the people working in them wouldn’t get paid. Rather I mean that the landlord would offer the currently desolate spaces to applicants at no or, at most a token, rent.

High rents are what kills creativity in retailing in Ireland. Without that massive overhead, we could see a hundred strange ideas rise and fall. Instead of a monoculture (everything a clothes shop, because they have high mark ups and low staff needs, for example) we could actively manage the mix to encourage a diversity of shops and services.

Create somewhere people want to go to feel part of something and you will have solved Smithfield’s main problem.

Temple Bar is the prime example of how this works. Not the Temple Bar you know about- the one managed by Temple Bar Properties and filled with tidy coolness. But the messy, Temple Bar of artists’ studios and quirky cafes in crumbling buildings that grew organically on licences and short leases while CIE prepared to level the entire city quarter and build a bus depot on it. It was the ability of that space, growing in the centre of town without any direction and freed of the expectation that they would turn in big money rents to CIE, to be interesting that attracted interesting people. It was eventually the living cultural contribution of those artists and teenagers on which the State-sanctioned branding of Temple Bar as the Cultural Quarter was built.

Smithfield has a few geographical assets. It is across the river from the National College of Art and Design. An obvious first step would be to offer low cost artist’s studio space. It is also just a bridge crossing away from the Digital Hub. Soaking the whole square in free Wifi would act as a magnet. Downriver, it is close to the Four Courts, crammed with young barristers with a lot of time on their hands. Upriver, it has the National Museum. It has its own Luas stop.

Let us see a modern Partisan Coffee House. A Victorian style Cabinet of Curiosities. Shops that stock every Little Magazine in the world. Let a thousand mad flowers bloom. Every one will manage to give at least one job to the area. They will bring life to a dead space. They will bring meaning and culture to a place that still feels as lifeless as a computer generated Artist’s Impression of what a development could look like.

If successful, the state will have increased the value of all that land collatoral we’ll own. There will have been a small bubbling fleet of new jobs and businesses enabled. The local community will get to live in an active, busy place with its own culture. And the city will have gained an attractive space where new ideas can take root.

At the price of a little bit of imagination, we have a chance to make something good for us all. I think we should take it.