You know how it is. You get up every morning, wanting to make a difference. You slog through day after day, scanning the horizon for any sign- any clue- that your work is having an effect. But every day, nothing.

So spare a moment to sympathise with Taoiseach Brian Cowen. In his recent interview on Prime Time he revealed both how badly he, and Fianna Fail have failed and how they ended up in this mess.

You see it turns out that, contrary to almost every possible measurable indicator, Brian and FF have been working to try to make Ireland ‘fairer’. 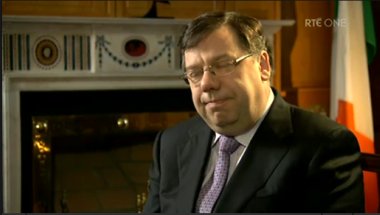 Brian Cowen can't say how disappointed in you he is.

“We’ve been building for the last 20 years a fairer society.”

Now, seeing as they’ve had 20 years to chip away at the thing, you might wonder how they’ve been so spectacularly unsuccessful. The answer comes immediately when Brian gives us the definition of fairness he’s been guided by for the last 20 years.

“We’ve ensured that we had a tax system where people could keep more of their own wages for their own benefit.”

A tragedy. They devoted themselves for twenty years to bringing about “a fairer society.” They just didn’t know what such a thing would look like.

Who amongst us will not now admit that after devoting two decades of their lives to letting rich people keep more of their money so that poor people didn’t have access to public services while trying to bring about fairness, that it is Fianna Fail and Brian Cowen who are the real victims here?

Certainly, his demeanour suggests he feels it is so. He feels our ingratitude like an ache in his soul.