National Gallery: The Liffey Swim and Islandbridge Regatta by Jack B. Yeats

Hand in your coats, turn right and you’ll come to the Yeats Rooms.

The two paintings hang side by side on your left. One, The Liffey Swim, is probably one of the most famous modern Irish works. The other, Islandbridge Regatta, its dream-twin.

The Liffey Swim teems with humanity- painted in 1923 this is hopeful vision of a city united after the Civil War.

The familiar shape of Capel Street bridge is a gentle hint of the context for this shared experience. Directly behind us, present but not shown, the shell of the bombed out Four Courts building- it’s broken dome like a cracked egg- still marks the unhealed wounds of a new state. Time and place layer meaning over the images.

Yeat’s composition has us in the action, a bystander craning over the other viewer’s heads. It is as direct a statement as an artist can make- We’re in this together.

And then there is the smaller, more emotionally intense, Islandbridge Regatta. Painted two years later- another sporting event on the Liffey, another view from the bank.

The similarities in composition only make the changes more startling. This is a dream, or perhaps an Aisling, of Dublin undone. The city vanished, omnibus’ become trees. Crowds become a handful of indistinct figures- suggestions of archaic dresses and faces turned away. A woman’s pale neck, her hair yellow, holds our eye.

If the Liffey Swim is the public space of Dublin- a shared experience created from the teeming mass of humanity- then Islandbridge Regatta is all it is not. A still, personal moment in a landscape where people are the exception.

Irish poetic tradition has always had space for the Aishling- dream visions of Irelands lost or that never were. In Islandbridge Regatta Yeats steps back from the Liffey Swim’s recording of the public world. He is starting the journey inwards to the paintings of the imagination- to creating new mysteries and myths to feed the dreams of his new, old country. 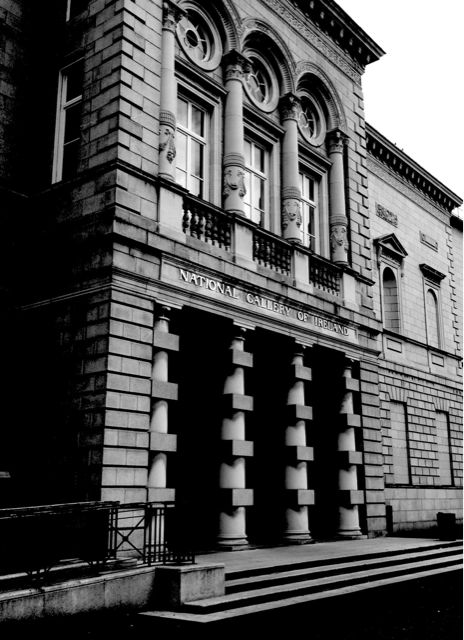