Life in the Internal Devaluation Zone

Yes, you there. No, not that woman over there. You!

Do you know what the hell is going on? Have you any idea what’s happening to you?

You do? That is reassuring. But, out of respect for that someone who might not be as clued in as you are, I thought I’d just recap it for you.

You remember when Ireland nearly went bust because we couldn’t afford to pay the interest on the loans we were being offered? You remember it happened because the entities who loan money are run by, basically, sociopathic lemmings and they suddenly realised that we’d promised to cough up enough money to pay off the loans of any banks that went bust. (Well, Fianna Fáil had promised it on our behalf, but apparently it’s one of those one-way decisions you can’t change once you’ve done it, like drunkenly texting your boss what you think of them in the small hours.)

Anyway, these sociopath lemmings all realised that if that bank collapse actually happened (and they collectively suddenly thought that it would) Ireland wouldn’t actually be good for the cash.

That meant that the country would go officially bust- which in the case of a country is an event precipitated by not paying debts as they fall due.

All of which takes us to the bail out- which was basically just us turning to the last set of people who’d give us money and dropping to our knees, wailing “Please save us!”.

They had to save us, because their banks were the ones who’d loaned our banks all the money they couldn’t pay back. So if we sank, so did their banks. But it’s hard to negotiate from a position of strength when your negotiating team can’t see for weeping and periodically start screaming at invisible enemies. And are on their knees.

Still, here we are now- as you know. But where is this exactly? Well, we’re in a state which is pursuing a policy of internal devaluation. Yes, you know what that is. You told me you did. I believe you. But, you might meet someone who hasn’t entirely got their heads around it yet. What harm if we just run through the basics we’ll be effortlessly conveying in a superior tone to our less informed fellow-citizen?

Let’s start with the definition of internal devaluation:

Internal Devaluation – where a country seeks to regain competitiveness through lowering wage costs and increasing productivity and not reducing value of exchange rate.

Normally, you devalue by decreeing suddenly that your currency is now worth less against all other currencies. They can suddenly afford more of the stuff you sell, so you get a bit of a boost.

But Ireland can’t decree that the Euro is now worth less. So, the alternative is to force everyone in the country to just charge less- for everything. Less wages, less fees, lower prices- the works.

The thing is, governments can’t actually decree that the private companies of Ireland make their stuff cheaper. And they can’t make private workers agree to be paid less.

So, they’ve been doing what they can- whipping up attacks on the people whose incomes they do control- public workers, people subsisting on social welfare and so on- and then cutting the money going to them.

This makes these people’s lives very difficult, of course, but the hoped for result is to reduce domestic demand enough that price and wage deflation will be forced into the private sector.

Regrettably, deflation is seen as the worst possible thing that can happen to a country. And it hasn’t even really started yet.

This is the lens you need to use to examine otherwise bizarre government plans like the JobBridge scheme. It is a method of forcing wages in the private sector down, by introducing an alternative subsidised workforce into the Market.

Let me know if you spot any more examples. 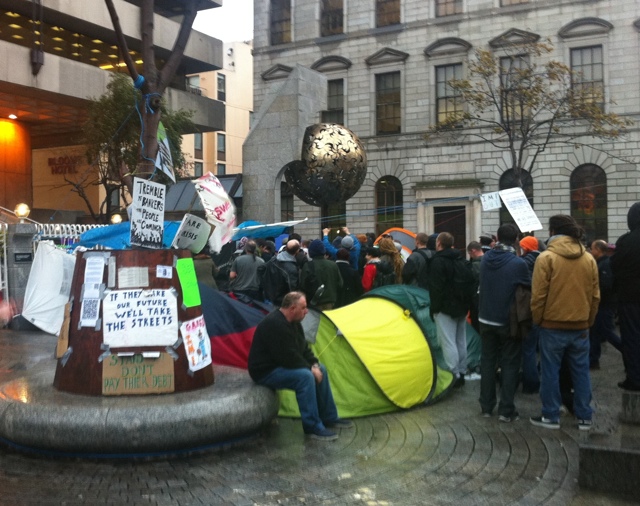