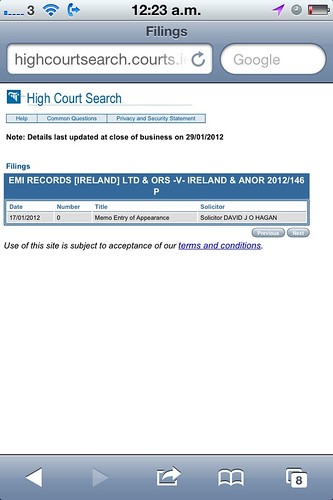 One of the more perplexing questions arising from Sean Sherlock’s efforts to ram a law he, by now, knows to be bad into force is why he hasn’t just taken the time to get things right.

The screen shot above gives the answer. It is taken from the High Court Search database on the Courts service website, Courts.ie.

It shows that, after EMI Records [Ireland] Limited & Others sued the Irish State and the Attorney General, the Chief State Solicitor entered an appearance on the 17th January 2012.

Once a defendant enters an Appearance they have 21 days to enter a defence. Before the StopSOPAIreland.com campaign, the plan appears to have been to give EMI the law they wanted and then try to settle the case without entering a defence. Perhaps they would also use public money paying EMI and the other record labels to buy off their claim of damages.

But the 21 day deadline has now come and gone. There’s still no sign of a defence being entered on the Courts website.

If you miss the 21 days, your opponents may extend time for a further 21 days. After that they’ll usually issue a motion seeking a kind of undefended win. Even if you rush in with a defence after that, you’ll have run up extra legal costs.

Ministers Bruton and Sherlock have just under a week to pass the Alternative Statutory Instrument sent to them weeks ago by Catherine Murphy and Stephen Donnelly.

Or they could demonstrate that local offices of UK record labels, with bare handfuls of staff, can dictate laws that damage our country’s reputation and economic wellbeing.

Not long now to find out which it is.