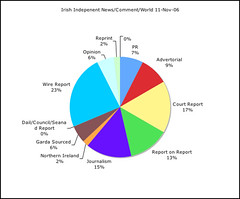 One of the dullest papers to do the Raw notes for. However, some points to note do occur.

Firstly, there is an unusually high proportion of wire reports. This reflects that almost all the stories in the world news section are taken from wire and syndication services. All such articles are written with an audience other than the Irish Indepenent’s in mind.

The Leas Cross Report was the major story in this edition of the paper. This means that the number of stories I’ve classified as Report on Report is quite high. But in this case, I think the paper’s decision to run a considerable transcription of the findings of the Leas Cross investigation was right. It was the most important story of the day. The problem is that it wasn’t followed up by any further investigation or questioning of the findings.

There was some handwringing about unimplemented reports in the past, but we didn’t even get a hint as to what person or agency had been failing in this implementation. If the paper’s journalists had gone beyond the transcription phase and established (or even begun a sustained process of establishing) the answer to that question it would have done its readers a real service.